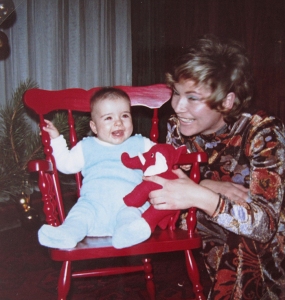 “For years, I had puzzled over being the only dark-haired, darker-complexioned person in our family. My emotional make-up and character didn’t quite seem to fit with the rest of my family either. I had kept searching for similarities between my parents and me, as every child does, and had found none. But my mom Hildegard had been very convincing as to our shared blood. She had scared me with stories of how her multitude of hereditary afflictions would manifest themselves in me as I grew older. She had a large goiter on her neck as well as suffering from acute asthma. I had inherited both from her, she insisted, and would suffer as she did eventually. No matter how unpleasant the knowledge, no matter how lost I felt, and whatever life threw at me while growing up, at least I had always been secure in the knowledge of who my family was. It proved to be quite dysfunctional at times, but it was a family. But now, with my dad’s revelation, the truths on which I had based my life shattered into a million pieces.” (Excerpt from Paralian, Chapter 1)

Most of our decisions are based on prior experiences. In the case of my parents, my adoptive mom came from a traumatized post-war family and my adoptive dad tried his best to somehow neutralize her neuroses. This all led to a string of lies that, over the years, became longer than Pinocchio’s nose.

Based on personal experience, I urge all adoptive parents to not underestimate the instincts of their adopted children. When you have been given away early in life and have lost your mom, an instinctual memory manifests itself, a sense of homelessness, a longing for something the child itself can’t even define. On top of this underlying time bomb there is a more conscious awareness of something always being slightly “off”.
As I grew up I remember getting my bearings – or at least trying to – by comparing myself and my actions and emotions to those of the people in my immediate environment. Of course everyone is different but, still, I was puzzled as to how I always seemed to be so different to practically everyone else around me – not only in soul and spirit, but also in appearance.
On really bad days I fantasized about being adopted, seeing it as a good thing. On good days I rationalized how genes skip generations and how maybe there was a dark-haired, temperamental grandpa somewhere whom I’d never met. Surely I had inherited all traits from this mystery person hidden somewhere in the dense forest of our family ancestry.

What always prevailed though, like a menacing shadow following me wherever I turned, was a feeling of deep homelessness and loneliness.

My parents were terrified of telling me the truth, because especially my mom feared I’d run off to my “real” mom as soon as they’d disclose my real identity. I honestly think no adopted child would ever do that. Our “real” parents are the ones that have been taking care of us, have made sacrifices, and have been our safety net over a long period of time. We share a history together. And after some time, history becomes stronger than blood.

When my dad finally revealed the truth I was shocked and uprooted. A myriad of conflicting emotions rocked my entire world for a while, like an earthquake, complete with landslides and falling debris. Still, through it all, and after I came out of it, my adoptive parents remained – and always will be – my parents. I never even call them “adoptive” parents. When I found my biological mom she was a stranger. Blood, in the end, was not enough in and off itself.

Don’t be afraid to tell your kid he or she is adopted. Do it as early as possible. It’ll preempt the hurricane of conflicting emotions that will be sure to rage within once all thought processes properly kick in.

Told at a very late stage – in my case when I was twenty years old – the revelation can have disastrous effects. In truth, I could have easily killed myself. Pure stubborn strength (a strength I didn’t even know I had at the time) prevented me from exciting well before my time. Everything I believed to be the base of my existence vanished in the blink of an eye. All that was left for a while was a deep, dark vortex opening its ugly maw beneath my very feet.

I wish I had been told from the beginning. What a privilege it could’ve been to know I was loved even though I had arrived in my biological mom’s womb. If you think of it, how beautiful to be chosen by a couple because they want YOU and no one else to become the center of their universe.

A press release from Literally PR concerning my memoirs ‘Paralian’ (launching soon!). This release focussing on the adoption side of things…

Press Release:
The Legacy of Adoption

London, United Kingdom, Thursday 14thJanuary 2016: Liam Klenk’s innovative memoir, Paralian, will initially strike most as a transgender man’s story despite the title strapline ‘notjusttransgender’. In reality, there are many elements within Liam’s life that are equally as defining as being a transgender man. Just as important to his identity in 2016 was the late revelation, in 1992, that he had been adopted at just five months.

Conventional wisdom suggests that adopted children should be made aware of their biological parents as soon as possible but Liam did not find out he was adopted until the age of 21, and then it was because of legal papers associated with a rather complicated marriage and divorce. He explains in his memoir, due for release by Matador on May 28th 2016:

In Zurich once again…