Thinking of this little family today. 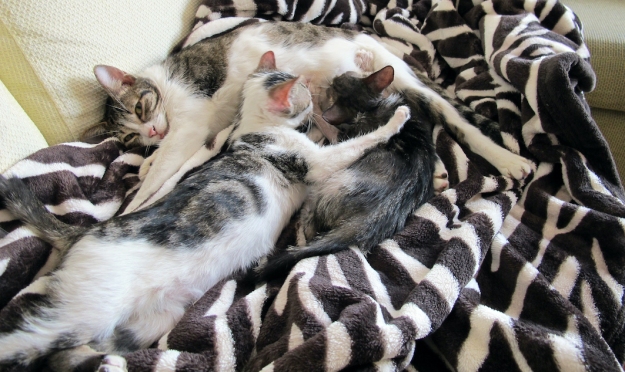 I found them in a pet store in Macau, in 2010. They had just been rescued from the street. A cat with three kittens. All of them were horribly sick. They had any infection you could think of… cat flu, ear infections, eye infections, ringworm, etc. One of the little ones was so tiny, he could fit in a tea cup. He looked like Gollum. Barely any fur left on him, huge eyes, and a greyish, wrinkly face. I wanted to adopt all the babies but the volunteers in the store told me honestly that Gollum wouldn’t make it. The other two stood a fighting chance. Only one of them seemed strong though. He was the largest of the babies… and the loudest… meowing non-stop. The other one didn’t look quite as bad as Gollum, but she was extremely tiny and scrawny for a five to six-week-old kitten. She had patchy, dark brown fur. What was left of it stood on end, making her look as if she had stuck her little paw into an electrical socket.

I decided to take the two healthier babies home. As we took them out of their cage, their mom crawled into my arms and didn’t seem to want to let me go. She was small for an adult cat, cuddly, with huge, expressive, green eyes. However, I had really only come for the babies. I left without her.

Arriving at home, her offspring soon crawled into every corner and jumped on every shelf. They made quick friends with the parrot I fostered at the time – a cheeky, red-lored Amazon named Cebi (short for Cebola… ‘onion’ in Portuguese. Since he was Brazilian, I had figured he needed a name reflecting his heritage at least linguistically). The first couple of days were mayhem with medicating the fur babies around the clock, plus trying to keep Cebi from pecking at their tails the entire time.

While I had my hands full with my ‘menagerie a trois’, I kept thinking about the kittens’ mom. The chances of anyone ever adopting her were slim to none. She was now together with Gollum in the cramped cage in the back of the pet store. Watching him die. It occurred to me how horribly alone and abandoned she must feel. Over the next few days, no matter how much the antics of baby cats and parrot made me laugh, I couldn’t stop thinking about her. “Screw this,” I finally thought on day five, “one more cat won’t make a difference.”

I went back to the pet store. Gollum had died already. And here was his mom. Huddled all by herself in the corner of her cage. The animal charity volunteers were more than happy to let me take her as well. I had brought a transport box with me, and off we went, to reunite her with her other two babies. As soon as we came through the door, however, her kittens didn’t welcome her. It seemed they had already made my apartment their territory. For two days straight, they hissed at their mom, and skulked around like John Wayne and Lara Croft, ready to draw their guns at any time. Thankfully, on the third day after the initial, slightly flawed homecoming, the kittens began cuddling with their mom again as if they had never been separated. One day later, she was nursing them as well. As they were massaging her tits with their paws, the babies were purring as loudly as twin tractor engines.

I named the two-year-old mom ‘Boo’, because of her big, round eyes, which made her look startled as well as inquisitive. She reminded me of Boo in the movie Monsters Inc. Boo’s little girl was fearless. Only a third the body size of her brother, she was the one who explored everything first, climbed up everywhere, and battled her illness with much courage and cheerfulness. She had a warrior spirit. I named her Lara. Her brother was easy to find a name for as well. He had never stopped meowing since the moment I had laid eyes on him and generally sounded like a mix between a goat and a squeaky door in need of WD-40. Henceforth, his name was Bocelli. My own little opera singer.

It took over a month for me to nurse them all back to good health. This not without them infecting me with ringworm first as well. We ended up being quarantined in the apartment together for four weeks, since the fungus infection was highly contagious. Thankfully, Cebi’s parrot feathers at least seemed to be resistant to fungus.

Six months later, despite all bravery, Lara lost her battle. At first, she had seemed to become healthy just as the rest of her feline family. But then, she had begun to show strange symptoms. She didn’t grow. While her brother became ever bigger, she remained so tiny, she could sit on my hand. Something seemed to be wrong with her muscles and nervous system as well. Five months in, she could barely walk anymore or lift her little head to eat from her food dish. Her muscles gave out every so often and she would just collapse on the floor. Nevertheless, she was still as cheerful as ever, snuggling in the crook of my elbow and purring her little heart out. I consulted with a veterinary and we both came to the unanimous decision that it was kinder to help Lara along and let her go.
She enjoyed one last meal with her family. Then, I carried her to the vet. I kept holding her in my arms as the injection was gently working its way through her bloodstream and putting her to sleep. I buried her in a niche high up on a rock wall along the coast of Coloane with her favorite toy, a little stuffed sun with a smiling face, pouty red lips, and blue eyelashes. Lara’s final resting place overlooked a beautiful pagoda and the South China Sea. She still rests there today and I feel more at home when I am close by, able to every so often walk past her resting place to tell her she is not forgotten.

Three years later, in 2013, I left Macau for the first time and shipped Boo and Bocelli to my dad’s place in Germany. They took to him faster than you can say “hello.” I moved on towards a more nomadic life.

Meanwhile, the cats contentedly snuggled with my dad and with each other. They still do. Boo is now twelve years old, Bocelli is ten. He still meows constantly. His mom is still as cuddly, loving, and caring towards both her son and her human companion as ever. She listens to and seems to understand every word my dad says. She licks his forehead and rubs her head on his hand. Whenever her son, Bocelli, sidles up to her in need of affection, she gently licks her son’s ears and face. Often, she lets him snuggle close. Then, of course, there are the inevitable, territorial wrestling matches when Boo needs to assert her dominance and make it clear that she can take the spot on the window sill or on top of the aquarium whenever she wants to. Bocelli usually doesn’t put up much of a fight but rather let’s her have whatever she desires.
Unless it is a box. He is passionate about his boxes.
He is a shy and anxious boy. Which is why he is also Boo’s admiring, respectful student. He watches her every move to learn and see what is safe and what isn’t. It took him five years of longingly watching Boo interact with my dad before Bocelli gathered enough courage to relax and snuggle with the tall, smiling human being, too. Now he rarely leaves his side.

My dad spends much of his days either feeding Boo and Bocelli or sitting on the couch with both cats curled up together in his lap. I am happy, I can visit them every so often. Each time, the felines are on a different diet, alternating between looking rather like furry balloons, or looking more like the little, muscular, former street cats they are. They both love snoozing in patches of sunlight. When sleeping deeply, Boo now snores as loud as a lumberjack…

I’ve gone back to Lara as well. Back home for a couple of years. Looking out over the South China Sea, remembering her, just underneath her resting place. Wondering if her little stuffed sun is still shining for her. Somehow, I am sure it is.