It’s time to stay close to home for a while… simply to be careful with finances… and also because, quite honestly, I just love my rooftop apartment with its little terrace. Even more, I love sitting on said terrace for hours together with my room mates JoJo and Luna, two adorable felines who I can’t imagine living without at this point. They soothe my soul and make me happy every moment of every day.

But I do get out for walks as often as I can, exploring the neighbourhood, downtown area, as well as the outskirts of my home town Zurich.

Water is what defines Zurich most of all. Lake Zurich, the old moat called “Schanzengraben”, the river Limmat, and the river Sihl. I never get tired of strolling along those bodies of water. In most cases they are lined with beautiful cityscapes as well, interspaced by parks. Or, further down the river Limmat, the riverside is lined with cozy cafes. And graffiti, glowing brightly in all colors of the rainbow.

After many years of living and working abroad, I am rediscovering my home and learning to love it with fresh eyes.

Ridiculously tranquil and idyllic moment during a walk around Greifensee. If you are ever in Kanton Zurich, this is a short hike I can really recommend. All the way around the lake it takes around 5 1/2 hours. Storks and other wildlife are all over the place. I used to come here often during my university years to go for full-moon-night hikes. Come to think of it, I’ll need to do one of those again soon.

Other than that, much has happened in the last few weeks. I received my permit to stay in Switzerland which took a huge load off my shoulder. Through the help of a friend (who alerted me to a great opportunity which I would otherwise have missed applying for) I found a job. And I found the perfect apartment for my old, toothless cat and me. We even have a small terrace overlooking Lake Zurich. JoJo spends most of his days outside if it doesn’t rain. Watching birds and absorbing as much sunshine as he can.

Me, too. Wine glass or coffee cup in hand, I just gaze into the distance. Over the lake and the Alps on the horizon, marvelling at how beautiful this place is… and wondering where my next wanderings will take me…

If anyone has any tips for weekend hikes in the Swiss mountains, let me know! I realize, I want to explore this country a lot more. I’ve only just scratched the surface of all there is to see.

The Wonderweg continues. Currently mostly just around Zurich. But it’s amazing. I have already lived here twice. Altogether, this is now my 18th year here, but I am daily re-discovering Zurich on a whole new level. Finding corners I’ve never been to before. Enjoying familiar corners with fresh eyes. Genuinely savouring every moment.

This picture was taken on Zueriberg. A hill above Zurich’s university. There is a small, steep path which winds its way uphill, and it’s called ‘Himmelsleiterli’ which means ‘Stairway to Heaven.’ Quite adorable really. And picturesque to boot.

Slowly, slowly after two years of couch-surfing and uncertainty about pretty much everything, the puzzle pieces are beginning to fit together again. A former work colleague alerted me to a position that was open in my old company. I applied and, voila, after several interviews and an assessment they decided to take me. I am over the moon about it, because one of my biggest worries was that I would have to take a job I don’t like, which would then have been only a temporary solution again. I really wanted to find a work environment and work content I’ll enjoy. To be able to settle a bit and stay long-term if possible. Now, I am so grateful that I ended up finding just that.

Then, only a couple weeks after signing my new work contract, I happened to stumble upon an incredibly cozy little rooftop apartment. I had been able to stay with a friend since I arrived in Switzerland beginning of the year. We had even thought of making it a long-term arrangement. But, after such a long time of not having my own home I felt ever more strongly that I needed my own space again. No matter how small it might end up being. I saw the rooftop apartment online. Applied straight away without even looking at it first. I just knew, this is my place. After I put lots of effort into an unusual application, the agency did end up taking me as a tenant. I am not sure exactly when I’ll move in yet. Which is fine. I am in no rush and will enjoy the last few weeks of living together with my good friend and flat mate.

Until I start work in a month, I’ll also spend as much quality time as possible with my toothless cat. I’ll wonder and wander around Zurich and the surrounding regions a bit more, too. Catch some sunshine and relax fully for the first time since the fall of 2019. It’s still step by little step. And no one ever knows anything for sure in life. But I am breathing a huge sigh of relief for now and am looking forward to continue starting a new life.

Hiking through the Camargue today was just wonderful. I don’t even know where to start… let’s see…

Flamingos! Flamingos! Flamingos! So many and so close. And… they are hilarious. They mooonwalk through the mud like Michael Jackson to stir up critters and gobble them up. They stick their entire head in the mud, coming up cackling and squabbling with the other flamingos around them. The noises they make sound a lot like a mixture between a fart and a burp… I just couldn’t stop laughing while at the same time observing these beautiful (elegant and gangly) creatures with awe.

There were so many dragonflies as well. I got quite ambitious photographing them. You tell me… what do you think of my favorite dragonfly shot of the day?

Then, I saw a couple birds of prey, black storks, lots of herons, several beavers, and lots of white horses.

The Camargue landscape is a thing of beauty in and of itself. Rarely have I seen such warm and intricate compositions of sunshine and foliage. I am utterly in love all over again (I was here twice before) and will surely be back again in the future!

Tomorrow will be one more day of hiking through the Camargue together with my friends Ute and Jim. Then onwards and westwards, towards Montpellier… 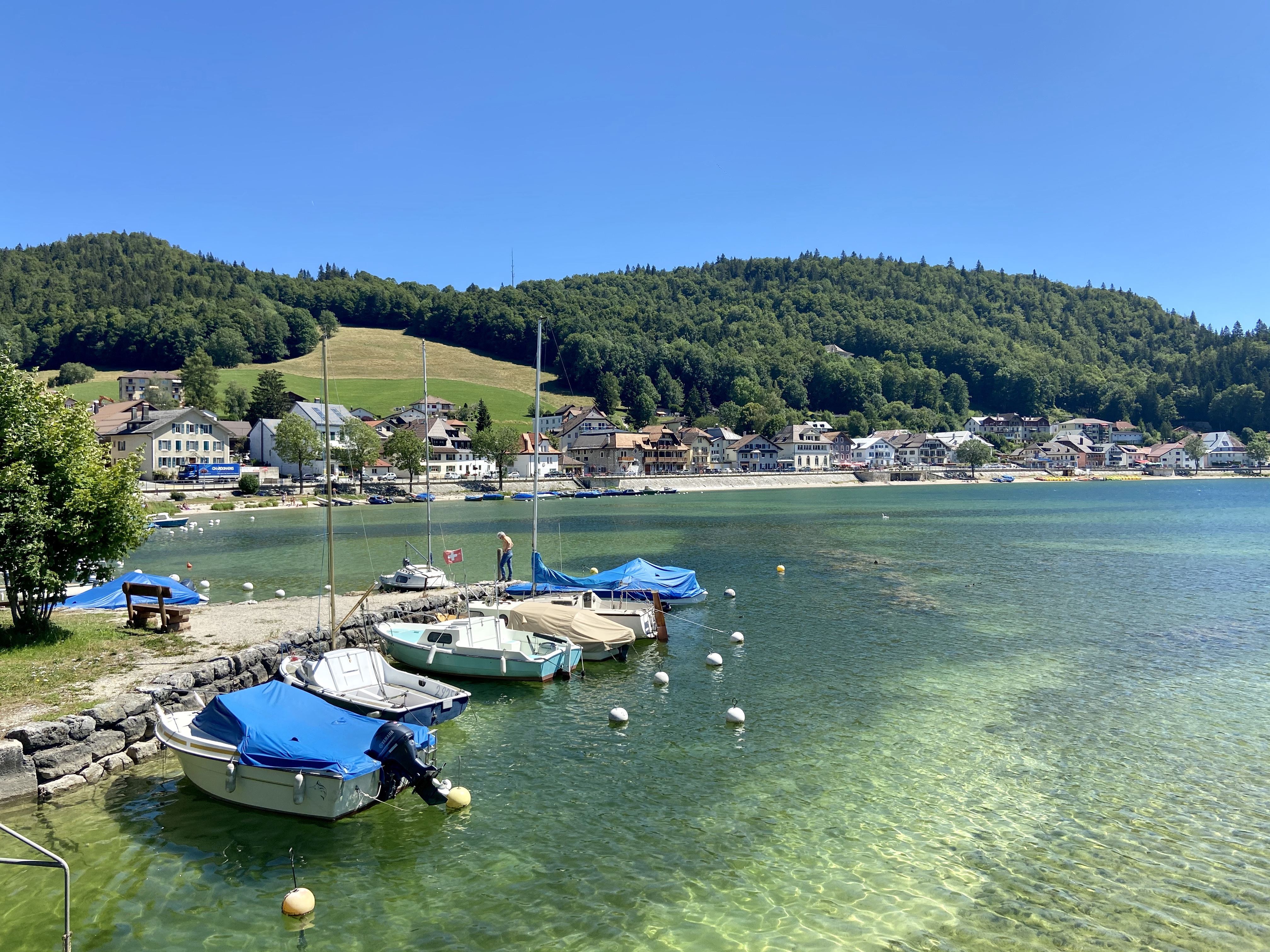 After three weeks of hiking, I finally came across a mountain lake.

It’s about time! I always saw the big lakes in the valley: Lake Murten, Lake Biel, Lake Neuchatel, Lake Geneva. They were beautiful but way too far away. I kept longing for a cold lake to be right next to the trail, to dip those tired feet in. Or, even better, to throw that whole tired body into the rejuvenating mountain spring freshness. Well, today Lac de Joux did not disappoint. And the little village of Le Pont (aptly named) was so beautiful it almost hurt the eye.

Beautiful summer days here at Lake Biel. I’ve decided to be extra careful and wait until Thursday before I continue on the trail. If I start now straight away, I’m worried the inflammation will come back. By giving my feet a bit more recovery time, I hope I’ll be able to keep on hiking without any further problems (for now). My days at the lake are filled with flowers. I write a lot and go on short walks in flip flops. 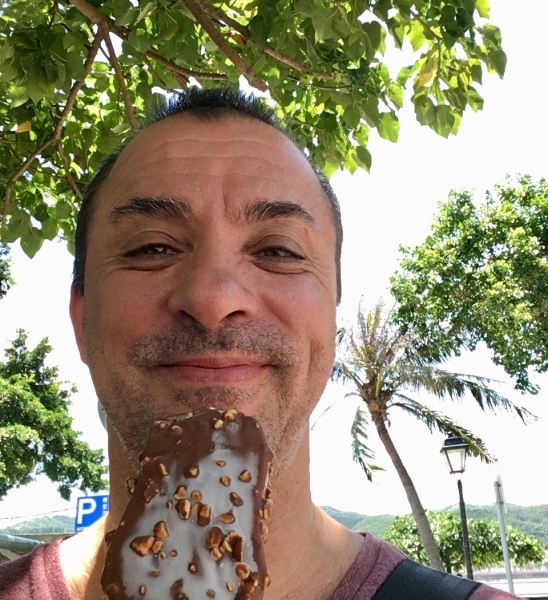 As I get older, I remind myself to not forget the simple pleasures which made my heart beat faster when I was a kid. Sweet, sticky ice cream dissolving on my tongue and brain freeze on a hot summer’s day… Sitting in the shade of a tree, day dreaming and escaping the sizzling afternoon heat… Balancing on that wall along the water’s edge, gazing out over the blue, sparkling water surface towards the horizon… Simple pleasures, but oh so satisfying!